Bias Interrupted
– Creating Inclusion for Real and for Good

The Black Lives Matter and #MeToo movements have revealed the inadequacy of our of our efforts to date, in addressing racism and gender discrimination. “We have to change systems,” declares Joan C. Williams, Director of the Center for WorkLife Law and professor at the University of California, Hastings.

Her research shows that mentoring and other programs only help people navigate systems that remain fundamentally unfair, while bias training, while well-meaning, is ineffective or even counterproductive. This was the subject of her recent TEDx talk “Why Corporate Diversity Programs Fail” which has been viewed by over 1 million people.

At this event in collaboration with Tartarklubben you will hear Joan C. Williams introduce bias interrupters: evidence-based, metrics-driven tools that can, over time, produce big changes. Some fear DEI initiatives require organizations to be rigid and bureaucratic, but Williams discusses small, simple tweaks can be easily implemented. For instance, gender-neutral job postings have been proven to appeal to men and women and result in more job applications. This online event is a live stream of Joan C. Williams presentation. 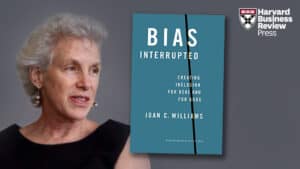 In her book ‘Bias Interrupted‘(publ. November 2, 2021), she brings more than two decades of expertise from the forefront of research on how gender and racial bias play out in everyday workplace interactions. “We’ve all been looking for the grand gesture to solve the problem of bias in one fell swoop,” she writes. “But it doesn’t exist. What does exist is a series of 1 percent changes that, with persistence, can help root out the bias that too often subverts our ideals of meritocracy.”

Joan C. Williams, Professor of Law and Director of the Center for WorkLife Law at the University of California, Hastings College of the Law

Described by the New York Times Magazine as having “something approaching rock star status” in her field, she has played a central role in debates over structural inequality for decades. Her 2014 cowritten book ‘What Works for Women at Work’, was praised by the New York Times Book Review as “deftly combining sociological research with a more casual narrative style . . . [that] offers unabashedly straightforward advice in a how-to primer for ambitious women.” Describing her 2017 book ‘White Working Class’, the Washington Post noted that President Joe Biden carried a dog-eared copy “everywhere, scrawling notes on the pages and pulling out well-worn copies to share passages.”

You can learn more about the NOCA theme ‘Diversity and Inclusion’ here!